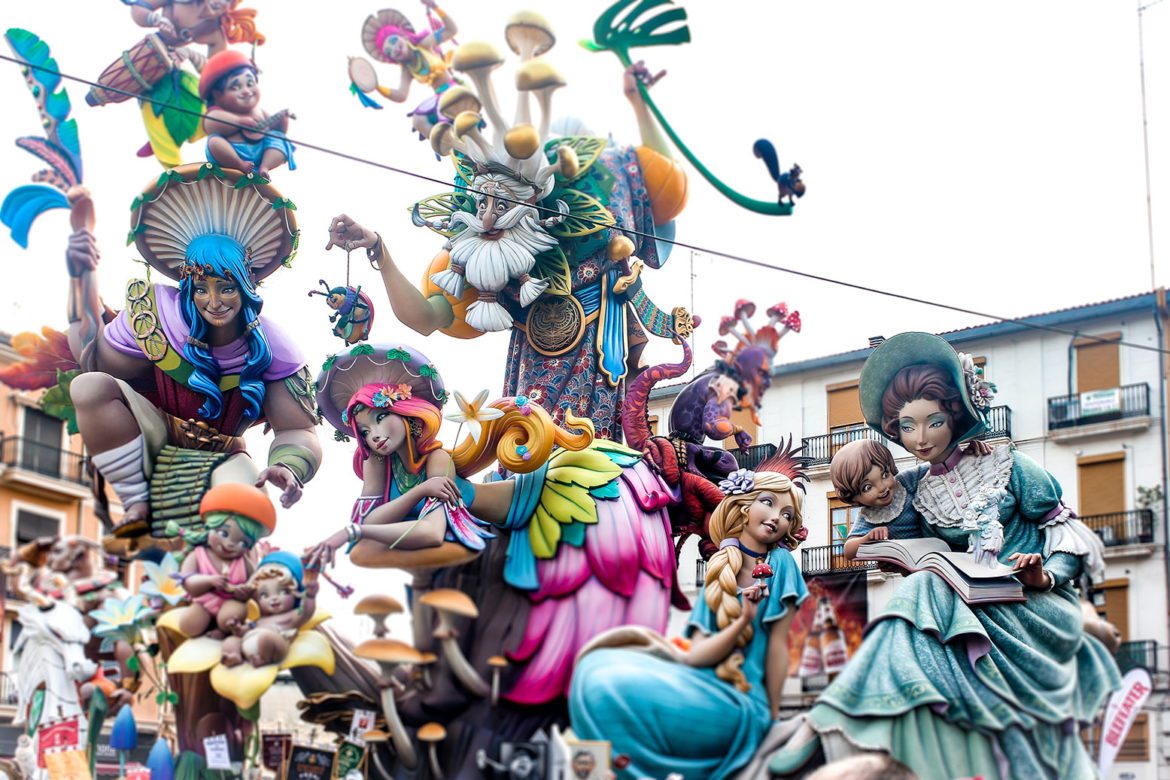 If you really want to visit a truly unique traditional Spanish festival, your first stop has to be the Valencian Fallas, known in the local Valencian dialect as “Falles”. The dates of the Fallas festival 2020 in Valencia are from the 1st to 19th March with the main burning celebration taking place from the 15th to 19th March. This festival is curious and spectacular because it transforms the city of Valencia into an open-air art museum of statues for three weeks before burning them all to the ground in this final celebration!

Valencia is one of the most important Spanish cities, being the third largest after Madrid and Barcelona and the capital of the province of the Autonomous Community of Valencia. It overlooks the beautiful shores of the Mediterranean Sea. The undisputed landmark of Valencia is the modern City of Arts and Sciences, a modern architectural complex of museums, an opera house and the Oceanarium sea life centre.

Other points of interest in Valencia are the Cathedral, the Miguelete, the Torres de Serranos, the Torres de Quart and the Lonja de la Seda, which has been declared a UNESCO World Heritage site.

Valencia is great to visit at any time of year, but the tourist interest goes through the roof at the beginning of March, when the city celebrates one of the most popular festivals in the whole of Spain: the Fallas festival.

What is the celebration of Las Fallas?

For the first half of March 2020, Valencia is getting its fiesta on. Fireworks, gunpowder and street art are the main order of the day during the festival par excellence of the city. In the festival, valencianos and valencianas, the citizens of the city, and all visitors, celebrate the arrival of spring with a full programme of events.

During the Fallas festival, the streets of Valencia fill up with more than 800 spectacular ninots (which means “dolls” in the Valencian language), gigantic sculptures made from wood, cardboard and other materials which represent topical and political issues in a comic way. They are commonly known as ‘fallas’ and are located around the city as temporary art exhibitions. At the end of the Fallas festival, these statues are all burnt to the ground in enormous bonfires in ‘la cremà’, except for the one that is voted the best. They burn the statues in Las Fallas to represent the start of a new Fallas year and the renewal of the spirit.

What’s more, there are daily mascletàs in the main square, fireworks shows that create as much smoke and noise as possible, so much that the ground shakes beneath your feet. You’re advised to keep your mouth open when you go to see the mascletà so your ears don’t pop. If you go to the Fallas, you’ll hear the city rumbling day after day with explosions, and you can expect to be woken up early every morning by the sound of people letting off firecrackers in the streets.

What food is eaten during Las Fallas?

The Fallas food in the city of Valencia is mainly buñuelos de calabaza, which are like little sweet pumpkin-flavoured donuts that are often served with hot chocolate for dipping. You can also drink horchata, a creamy drink made with nuts.

There are parade floats, food, fireworks, street parties with open-air concerts, traditional costumes and much, much more at the Fallas festival in Valencia. Be sure to visit the Valencian Fallas in 2020!

Congratulations, you have found a buyer for your Spanish property! You should now instruct a lawyer to represent you in the…

Disclaimer: this post is of general interest only and is not to be construed or intended as substitute for professional legal advice.

"When you visit our site, cookies are stored on your computer - small text files that help us track your visits. They also make it possible to remember your chosen language, facilitate navigation on our website and enable the playback of multimedia materials. They do not contain personal information that allows you to identify the user if he is not registered on our site, and do not give access to the hard drive of the computer. The personal information you provide to the company will only be used by TND Real Estate Agency Alicante in accordance with its privacy policy, which does not apply to third-party sites."